AAMAC is grateful to our volunteers who donate their time and expertise.

Let us know if you are interested in knowing about volunteer opportunities.

Do you have MDS and are interested in participating in a clinical trial?

Please click here to see if you qualify. If you feel that you qualify, please print the clinical trial information and discuss with your oncologist/hematologist.

AAMAC funds research into bone marrow failure diseases such as aplastic anemia, PNH and MDS. The following are current examples of work we at AAMAC are proud to fund.

We have meetings in Ottawa, London, Hamilton, Edmonton, Quebec, and Toronto this spring. Find a meeting near you!

The Excellence in Advocacy Medal’s purpose is to recognize an individual or group that has contributed significantly to advocacy efforts, improved care, treatment options or improved access to care and treatment options on behalf of bone marrow failure patients. The award is a plaque usually given out at an AAMAC event but due to COVID19 restrictions, the presentation to this years recipient of the TEAM Award, Chris Meyer was virtual.

It is unclear when Chris first became involved with AAMAC but it was certainly before June, 2004, when her partner, Rod, and she ran the Ontario Chapter of AAMAC. They, together with other Ontario members, were very involved in organizing the Spring Swing, an Ontario Fundraiser. At the time, Chris also did a lot of work with Canadian Blood services in raising awareness of the need for blood donations, very much needed after the Krever Report and the tainted blood scandal.  Chris became involved with AAMAC because Rod had been diagnosed with MDS. Sadly, by 2005 his MDS had progressed and he needed a stem cell transplant. Very sadly, he contracted an infection during the transplant which proved fatal.

Chris did not drop her AAMAC contacts but, rather, became even more involved and joined the Board in 2006. Being a Board Member living in Toronto in 2006 in many ways required a lot more work than it does to-day. AAMAC’s only employee was a part-time Office Assistant and the local Board members were expected to help out and they did. There was also an incredible amount of work involving advocacy and Chris, despite having full-time employment, was always there to participate.

In 2010, Chris became AAMAC’s President and was adamant that AAMAC had become too large to continue without an Executive Director. She was instrumental in finding our current Executive Director, Cindy Anthony, for us. Chris, we can’t thank you enough for this!

Chris left the Board in 2012 but didn’t leave AAMAC. She continued as the Newsletter Editor until 2019. Despite her departure those of us who know her, know we can give her a call any time should we need her help or have a question. Chris, you’re missed but your contributions to AAMAC are still so very much appreciated. 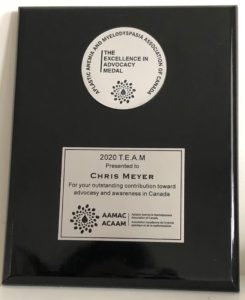 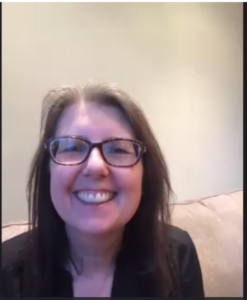